»  Coloring Articles  »  How To Draw A Colorful Cosmic Cat

How To Draw A Colorful Cosmic Cat

Today, we will help you how to draw a colorful cosmic cat. This is no ordinary cat, so, let throw other people's rules out the window – and to your imagination run wild. We'll show you how I created this cute, cosmic cat with colorful, psychedelic designs.

In this drawing lesson, you can use a pencil, a kneaded runner (eraser), Prismacolor colored pencils (you can also use markers, pens, or paint), and drawing paper. 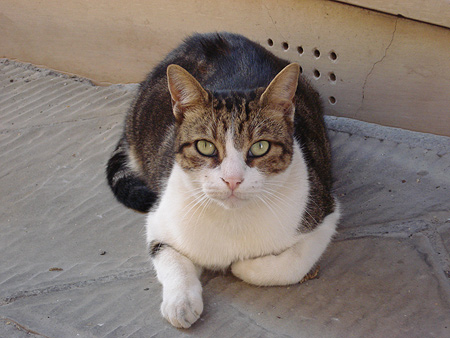 Cropped the photo to show a close-up of his face: I love this picture. 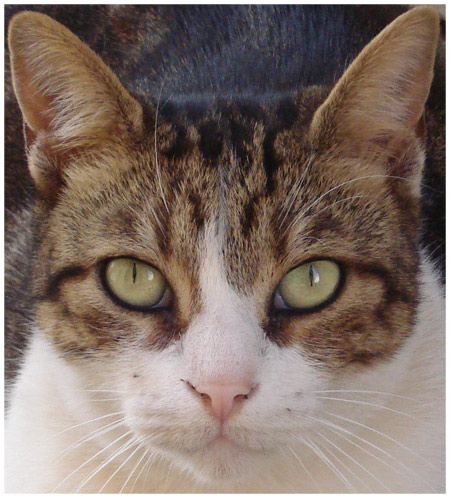 Next, divided the picture into a simple grid by drawing a line in the middle of the picture both horizontally and vertically: 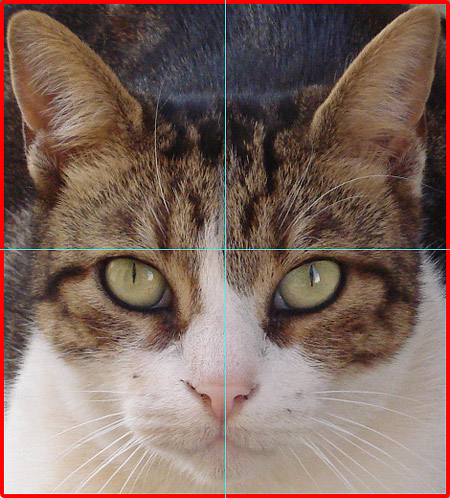 On a paper, drew a similar grid: 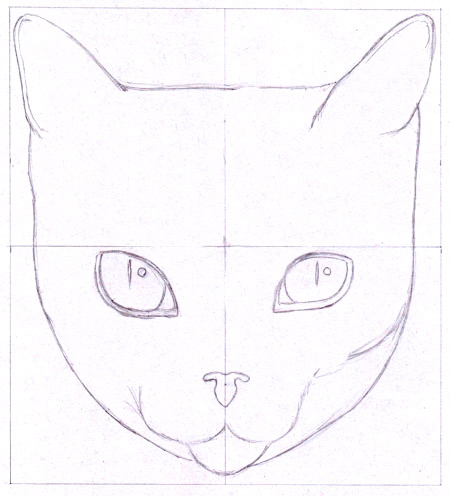 For instance, look at the photo of the cat, and notice where his ears are. You can see that they are in the corners of the photo, but not quite touching the edge of the grid. So your job is to replicate that on your paper. Next look at how his chin is near the bottom edge of the photo, right in the middle of the central vertical line, and draw that on your paper. Draw lightly, so that you can erase any mistakes. (But more importantly, don't be afraid of making mistakes! No one gets it right on the first try. That's what erasers are for!)

Follow these same steps to draw the outline of the cat's head, as well as his eyes, ears, nose, and mouth. If you want, you can also draw outlines to signify the different patches of color on the cat's fur, like I did below: 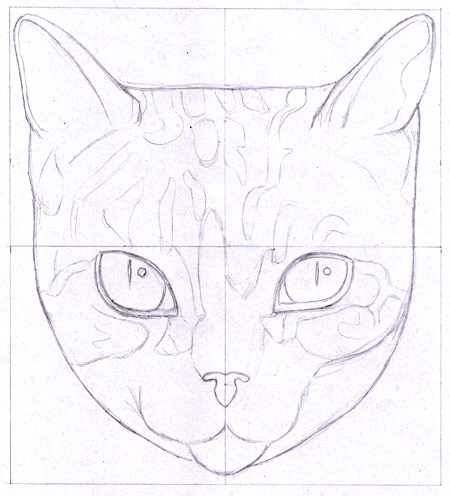 Now you get to the color the cat however you want – using any designs, patterns and colors that you want! We'll show you how I drew mine, but feel free to follow your creative bliss and draw your cat in your own unique way.

First we outlined the cat's head and main features with violet: 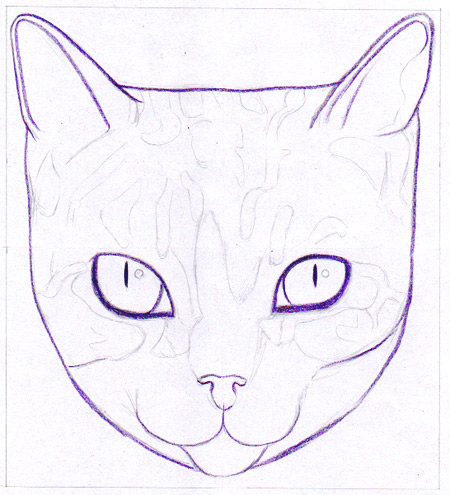 Then we put a sheet of blank paper over the drawing, and used a ballpoint pen to draw whiskers on the blank cover sheet, like so: 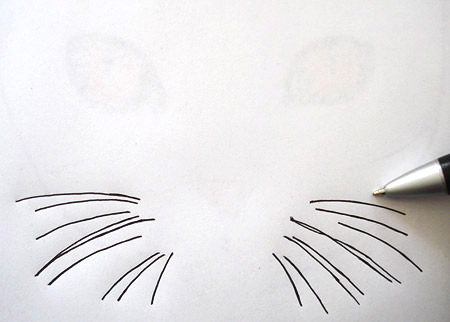 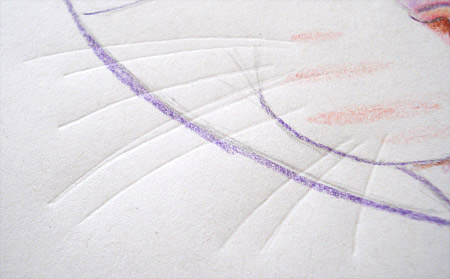 Next, colored in his eyes. We drew sort of a multicolored striped pattern, but you can color your cat's eyes any way you want! You can make them a single color, or a few colors, or draw polka dots or hearts! Up to you! 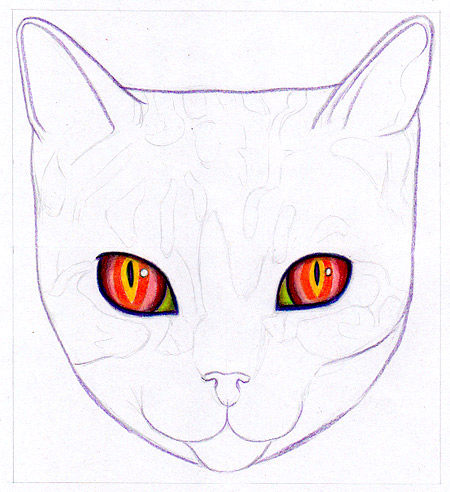 Then, let started working on the cat's ears: 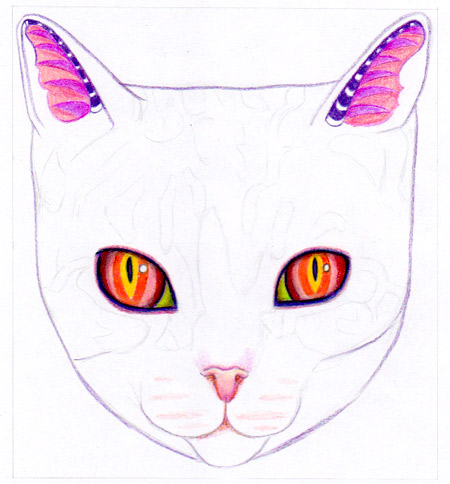 You can draw any design you want! And this is our ultimate design. 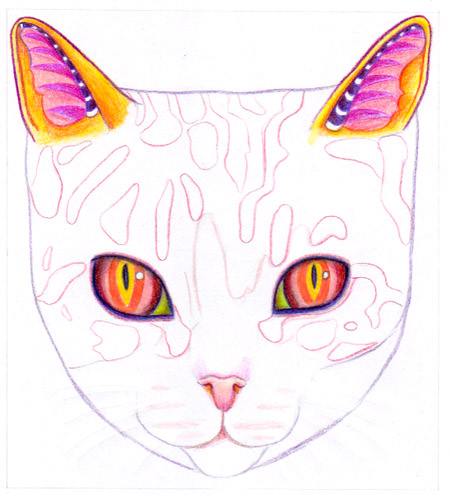 Now, moved on to his fur. We looked at the cat photo and picked out the darkest areas of fur and in picture we drew those areas in red with white polka dots: 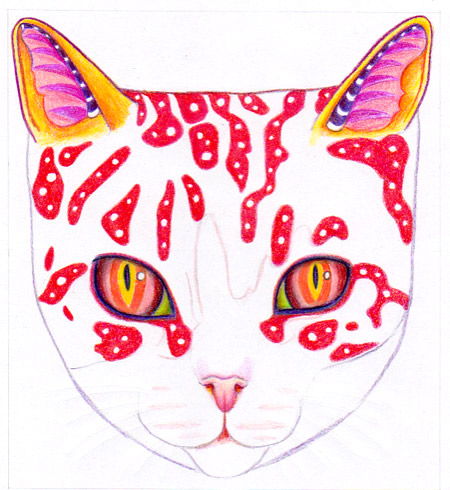 Next, drew several orange circles inside circles (kind of like a target shape) in between several of the red areas: 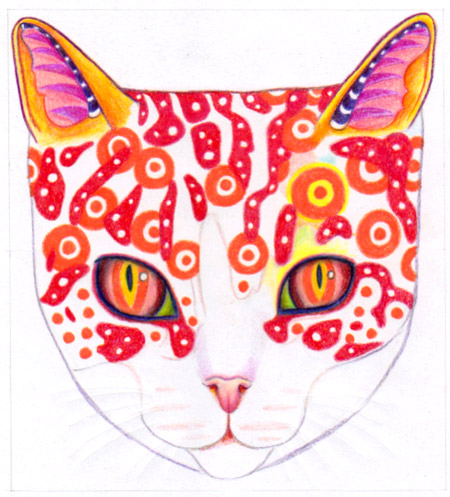 Then, drew yellow circles around the orange circles: 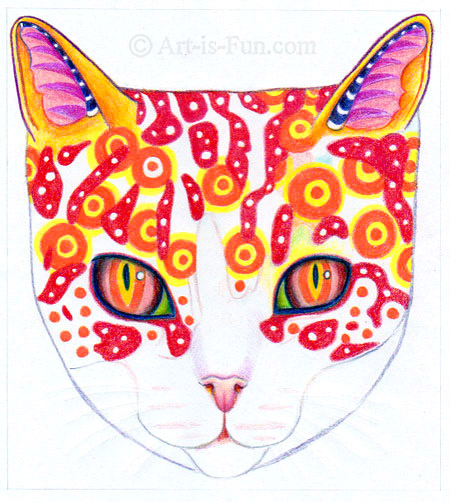 The next step was to fill in the rest of the blank areas at the top of the cat's head. We chose to color in those areas with light blue, and use a darker blue to add some short "fur" lines. 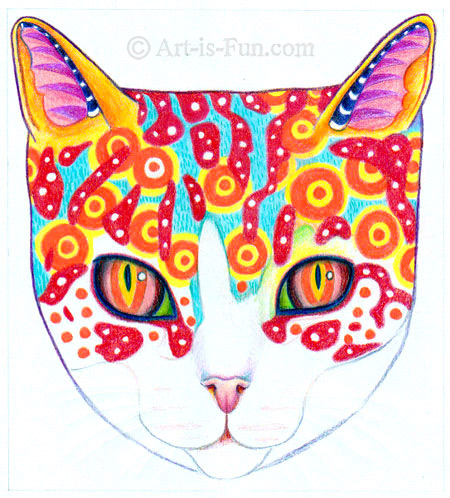 Next we filled in the middle part of the cat's face with greens and yellows, along with some darker green fur lines. We also went back and added some dark blue fur lines into the red spots, to help give the cat's fur more texture. 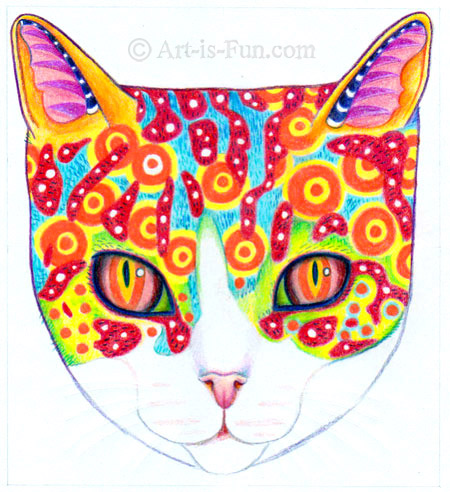 Then we finished the cat by coloring in the bottom half of his face with soft pinks, lavenders and blues.

Remembers those whisker indentations we drew earlier? In the photo below, you can see that those indentations stayed white, even though we colored over them: 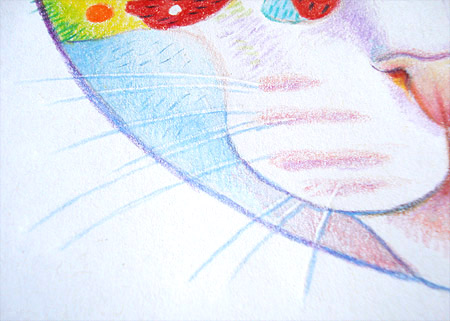 Okay! And here is the finished drawing. That great! Is that right? 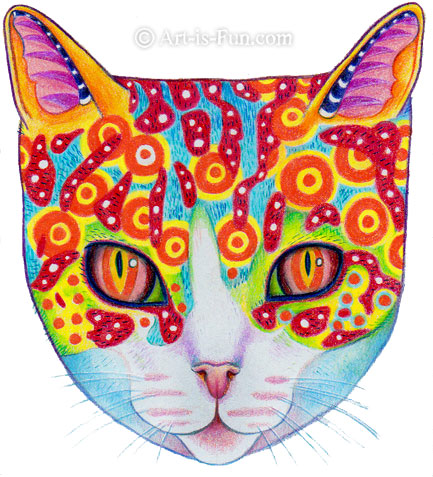 Now, you can also use these ideas to create other funky animal portraits. You can turn any animal into a Cosmic Creature – rhinos, kangaroos, horses, anything. Have fun!

You can read more